So as most of you know, SOF Studios has been working hard for quite some time now to bring back tactical based gameplay with H-Hour World’s Elite. Recently it was revealed that the “Proof of Concept” had reached its limit and most if not all accomplishments had been reached, and that it was time to move on to bigger and more beautiful things. It wasn’t that they were unsatisfied or disappointed with the outcome, the desired gameplay had been reached and it was coming to a point where they really just couldn’t get the game to graphically look any better in Unreal 3. In comes Unreal 4, one of the most powerful and robust engines out there today. Now we had all been told that H-Hour was to run on Unreal 4, but I am not sure how many knew that the proof of concept was actually being built in Unreal 3. What a surprise this was to all of the graphical doubters, and for all of those out there who were questioning the “next gen” look of H-Hour, well time to remove your foot from your mouth! 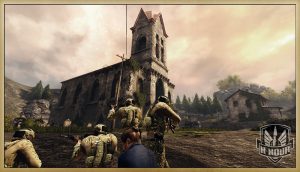 In David Sears’ (SOF Studios Creative Director) latest blog post, he actually revealed that that time had come to start migrating and upgrading all of the graphical assets that were from the proof of concept build. The new tools of Unreal 4 provided a much faster work flow, while providing that next gen functionality and look that will for sure be the icing on the cake. The studio is currently continuing to bring over all of the original assets and upgrade them to the new engine standards which is actually going quite smoothly according the last reports.

So all this talk about upgrades, how about we take a look so you guys can see for yourself the amazing transformation that has been happening out at SOF Studios.

The screenshot comparisons are an amazing representation of what these guys are doing, and it goes without saying that these guys are quite possibly the most important dev team in the industry right now. Not because they are creating a game that I want, but because they are creating a game that the community wants. They are trying to bring back what brought so many gamers together, tactical team play, and this team has proven they are building the game for us and continues to listen and provide the gamers with what they want. A lot of studios talk the talk, but SOF is actually walking the walk! I have been in the studio, and I have felt the magic first hand and can say that when this game hits retail, it will be a victory for many on countless levels.

If you have not already, you should head over to H-Hour’s main website and get involved in the forums. They can also be found on Twitter and on Facebook too. We simply cannot wait to get our hands on this game again which will be coming to PlayStation 4 and PC sometime in 2015.

If you have any questions about H-Hour or our experience to the studio, drop your comments down below or you can head over to our Facebook or Twitter accounts as well.  Thanks for reading and be sure to share your favorite HTG stories with your friends!