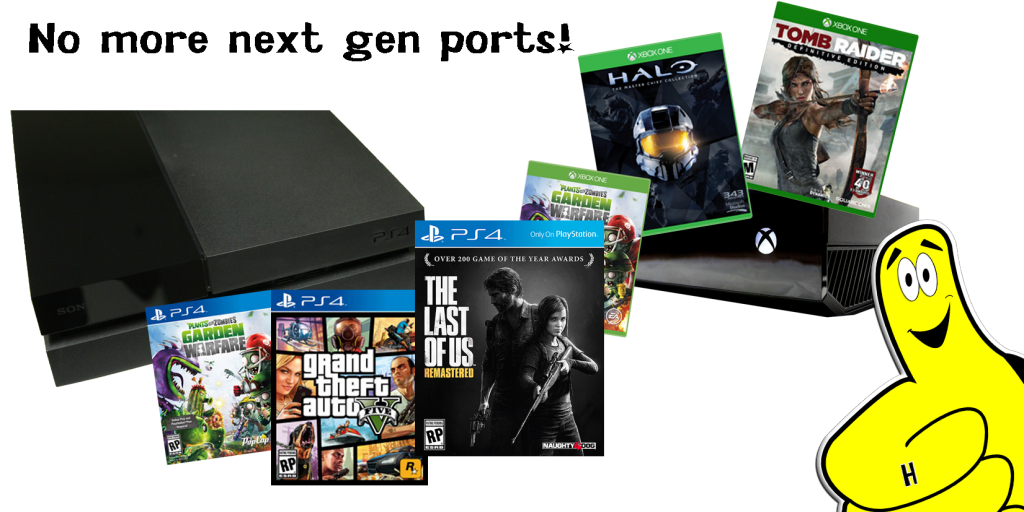 Next Gen porting has seemed to become the new standard, and I think it is time that somebody says something about it. I am in no way stating I don’t enjoy a classic being remastered that was possibly an all time favorite of many, but re-doing or remastering games that are less then 18 months old just seems a bit redundant to me. As a result of this over practice of recycling, I have a few questions that I think others will also have regarding this new growing trend.

My first question is why do developers/publishers think we want games ported that are less then a year old that were supposed to be a console exclusive? I literally bought an Xbox One because of games like Titanfall, Deadrising 3 and Plants Vs Zombies Garden Warfare all were expected to be console exclusives and were a major selling point for the Xbox Ones at launch. Although there seems to be no rumors of Deadrising 3, both Titanfall and PvZ Garden Warfare have both had rumors about other systems coming soon almost since they launched, and PvZ GW now even has a release date for PS3 and PS4 while we are still waiting to see what happens with Titanfall (latest rumor being Titanfall 2 is coming to PS4). Now an even bigger problem arises for me.. do I buy it again so I can play it with my Ps4 friends?? Sadly the answer is almost always going to be yes. Which leads me to believe that I, and possibly you, are the reason that extra time and effort is being used in order to milk these titles for as much as they can. So how do we stop it? I am not sure I have the answer for that unless we all avoid purchasing it again. For any of you out there who didn’t get a chance to play these games in current form, this will be an added bonus for you but personally I think the target audience is the die-hards who loved the game so much, they most likely would buy it again.

Next question I have is, was this the plan to begin with? This we may never get a solid answer on, but lets think about this for a minute… if game developers can get an extra chunk of change for some time based exclusivity to a specific console, then gain additional profits for their game beyond initial sales, while then continuing this flow of incoming cash when it hits the next wave of consoles. This method also would benefit the consoles, especially when it is marketed to believe the only place to play will be on “our console.” This is all possible, because of the misdirection of what “console exclusive” really means. I can honestly say I may not have bought an Xbox One AND a PS4 knowing what I know now. Why? Well if 2 of the 3 reasons I bought an Xbone for will soon be available on my normal platform of choice, what sense would it make to buy an Xbox One too?  (lol that sounds funny.. xbox one too!) For me, the majority of my friends are on the PlayStation Network. Now I have plenty of friends on Xbox Live too, but the numbers are for sure dominant on the PSN. I am in no way saying Sony isn’t at fault with similar practices, or that Sony is better then Microsoft, just stating that the PSN is where I normally play. Sony doesn’t really seem to be pushing games to other consoles, but they are re-releasing a ton of games that are great sellers on current platforms, but are expected to sell more units on the next gen platforms too.

We have created a list, that is surely incomplete, but is just a slight glimpse of what we know is going to be re-released on “next-gen” sooner than later (not in any specific order then us remembering them):

Tomb Raider Definitive Edition – Already out on PS4 and Xbox One

The Last of Us – coming to PS4

The Walking Dead – Coming to PS4 and Xbox One

Diablo 3 – Coming to PS4 and Xbox One

Ratchet and Clank – Coming to PS4

Payday 2 – Coming to PS4 and Xbox One

Will all of these games look better then ever? Most likely the answer will be yes. When looking at this list, I see one game that should qualify for a facelift/reboot and that would be the Halo Master Chief Edition. Having the Halo experience all on one disc running under one interface is an amazing compilation that has had enough time pass to warrant a re-make. Lets talk about the time and effort spent to re-release these on the new consoles. Look, I am not game developer, and I am not going to sit here and tell you game remastering is easy or hard, but one thing I can say with confidence, is that it takes time to re-create these experiences for the next gen. It just simply has to. I just can’t help but feel like these teams re-creating the experience should be creating new artistic and challenging content regardless if it is DLC for current games, or a new content all together. I say skip a console generation or 2 before re-mastering these games IF the demand is there. Otherwise, lets keep pushing the boundaries of  where we have not been, rather then recreating the same experiences but with slightly better polish.

To wrap things up, my final question, which has multiple parts is, what do you guys think about this? Will you continue to buy the same games over and over again as they decide to slow down new ideas to repeat old? or will you pass on these upcoming re-releases for new and different adventures/challenges? Fact is, if we have covered a game and it gets re-released it actually helps us out on views which is ultimately good for HTG, but as a gamer I actually would prefer the time to be spent putting out DLC or new content for those successful series’. Alright my rant is now coming to a close, we would love to hear from you in the comments below or you can jump to any of our social pages which are noted below as well.

0
0   0
previous YouTube and meta-tags (what is a spam tag) - HTG
next H-Hour World's Elite gets major makeover! - HTG