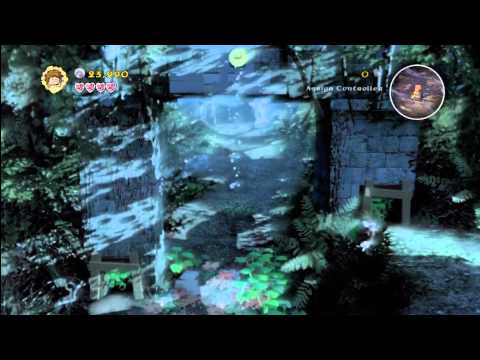 (HTG) Brian walks you through FREE PLAY for Level 6, Amon Hen FREE PLAY, for Lego Lord of the Rings. We grab all 10 remaining Mini kits we missed in our Story Mode Walkthrough, we find the Black Smith Design, all 3 hidden Items for our Treasure Trove and we also reach the stud requirement for True Adventurer status which is 50,000 studs. Below we have also included a text step by step for easy following. Hopefully this helps you for Level 6 Amon Hen FREE PLAY.

Mini Kit 1: This actually takes place playing with both parties. You must shoot 6 statues that have targets on them with your bow. When you are playing as Frodo, even in Free Play, you won’t be able to change to another character. You will instead need to use one of your Mithril Bows from your Treasures to complete this.

Mini Kit 3: As Frodo, after using the catapult to scare away Boromir, shoot the target above where Boromir was standing to drop the rock that rolls down and destroys the catapult. Now rebuild the catapult and shoot it again to drop the chest from the trees

Treasure 1: In the final area that you scare Boromir in, after he runs off shouting “I’M SORRY!”, use the Mithril Rope on the peg below the stone archway to get on top of the archway. Now use either the Mithril Shockwave Axe/Golden Axe to jump smash the cracked ground that is right in the middle of the archway to collapse the arch and release the Stop Wand

Treasure 2: Use the Berserker to pull the orange handle at the camp, then destroy the debris in the back area. Light the fire with Sam, then find the ingredients in camp for a cooking puzzle. Once your ready place the frying pan on the fire and the Uruk in this area will give you the Arrow Helmet for the food

Mini Kit 4: Use Aragorn to destroy 4 Morgul bricks before you find Frodo with the green sword

Mini Kit 5: Use Sam’s Elven Rope on the pole on the right side of the camp, then use Gandolf to rebuild the blocks to match the one next to it

Mini Kit 6: At the pillar puzzle, where you must slide the 2 pillars to access to the next area, use an Legolas to jump from the top pillar to handle to the right of the path and jump into the hidden hole to find the Mini Kit

Mini Kit 7: Before climbing the wall Gimli,Legolas and Sam help build, use Frodo and head into the dark cave below. Kill the guard and then destroy the rock to find the Mini Kit

Treasure 3: After finding Frodo, after the first set of Uruk-Hai attack and break through the barrier, use Berserker’s bombs on the pillars on the left side to find the Treasure Trove Item

Mini Kit 8: After the second barrier is destroyed by the Uruk-Hai, use Sam to grow a plant in the soil to your left and bounce up to kill the 2 Uruk-Hai and grab the Mini Kit

Mini Kit 9: BEFORE YOU KILL ALL ENEMIES BY LAST MINIKIT, run to the closest far right wall, head towards the screen to find a secret path. Use a Berserker Bomb and head into the secret tower and climb all the way to the top to find this Mini Kit

Mini Kit10: During the battle with the Lurtz, use Sam’s Elven Rope on the right side of the area, then shoot the 6 targets that appear in the upper treeline with your Bow

Blacksmith: This is located on the statue behind Lurtz. After climbing through the crawlspace, hit the statue BEFORE attacking him and you will get the Mithril Rope