Home Games Lego Lord of the Rings: Level 15/The Paths Of The Dead – FREE PLAY – All Collectables – HTG 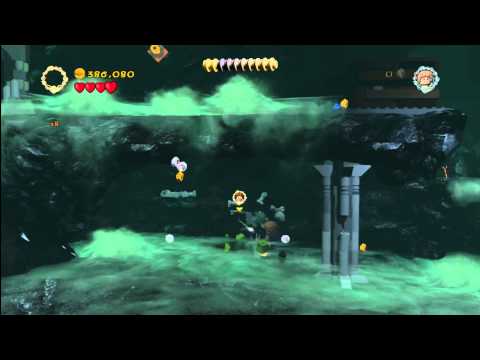 Lego Lord of the Rings: Level 15/The Paths Of The Dead – FREE PLAY – All Collectables – HTG

Lego Lord of the Rings: Level 15/The Paths Of The Dead – FREE PLAY – All Collectables – HTG

Mini Kit 1: After the first set of spirit hands try and grab you in the beginning of the level, destroy the skeletons on the left and right side of the path, then put together the chest.

Mini Kit 2: Grow 5 plants using Sam while roaming through the level. These are scattered throughout the “level”

Treasure 1: – Skeleton Key : After building the bridge out of Morgul Blocks, in the next large room, below the nook with all the skulls on the left side, use Sam and you can find a soil patch to dig in hidden by the green mist

Treasure 2: – Calcium Armor : In the area with the blockage in the middle of the path, that you must destroy by smashing from on top with Gimli, use the Mithril Fireworks on the right wall object. Now use a bow to shoot the skeleton laying in the tomb you opened to receive this treasure.

Mini Kit 3: *** Before *** destroying the arch with Gimli, select Frodo and move down the path on the left into the darkened cave to find the Mini Kit

Treasure 3: – Golden Axe : After leaving the area above, look for a chest with an orange handle on the right. Use Uruk-Hai to open this to get the treasure.

Mini Kit 4: Next to the treasure you will see a small object with a gold base on it. hit this to knock it over, then use Elven Rope on it to destroy it. There are two of these in the area to destroy each which gives you a purple item to combine. Combine them and offer it to the memorial up high just after the second gold object.

Mini Kit 6: Before leaving the room where you make the Offering, shoot the target high up on the right wall to release a rope you can climb to get this treasure

***Grab Mini Kits 7,8,9 and the Blacksmith Recipe before leaving the Big Gate Room***

Mini Kit 7: In the room with the big gate, head along the wall on the right and into the nook to find this.

Mini Kit 8: Use Mithril Fireworks on the rocks below the recipe to reveal a catapult that shoots the cage off the treasure above the gate. Use Gollum to climb the wall in the upper area to reach the Mini Kit

Mini Kit 9: In the upper area, light a fire with Sam to release some stackable blocks. You can use Gandalf to stack them to reach the treasure or grab Legolas and jump off of the brick laying on the ground

Blacksmith: In this same area, look up on the left side wall to see the recipe. Now use an Elf to jump up on to the rocks to reach the Mithril Shield recipe

Mini Kit 10: During the battle with the King of the Dead, use Legolas and shoot an arrow at the three banners in the area. One is on the right and two are on the left of the entrance to his castle

Link to our Lego Lord of the Rings playlist: