Warning: I would like to stress the fact that this game is in it’s alpha development phase and is early access on Steam so any screenshots and opinions given here may not represent the final product.

Nom Nom Galaxy is a 2D sandbox game with some tower defense elements. Most of the map is breakable and the objective of the game is to build a soup factory to compete against a rival soup company. You can win the game by obtaining 100% of the market on a foreign planet where you and your rival send their soup to be sold. You also have to be careful of the occasional attack by aliens on your factory as they can destroy your buildings and cripple your profits. 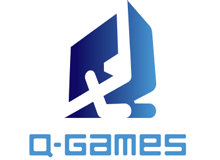 Q-Games is based in Kyoto, Japan and have close ties with both Nintendo and Sony. They started off developing technology projects for the aforementioned companies. Their first major release was a series of puzzle games for the Game Boy Advance known as ‘Digidrive’. They later went on to make Star Fox Command for the Nintendo DS. Their biggest project to date (which is still ongoing) is the ‘PixelJunk’ series of games for PlayStation Network. In March of 2014, Q-Games made their first voyage in to the PC market with ‘Nom Nom Galaxy’ which is labelled as a PixelJunk game. It is expected that Nom Nom Galaxy will release on PlayStation at a later date.

As with most Steam games it was quite easy to get ahold of the game. We received an early access code and the redeeming process was quick and easy. The game is 103mb large and it took me roughly a half hour to download and install. Unfortunately, my AMD Radeon HD 6450 was met with performance issues where I was only getting 25 frames per second consistently. Since the game is brand new it’s been hard to find a second opinion to see if this has been happening on all systems so I don’t have a definitive answer for you, if you’re reading this after the release period then I recommend doing some research to see if the issue has been resolved. The poor performance did not make the game unplayable for me though so I drove on. 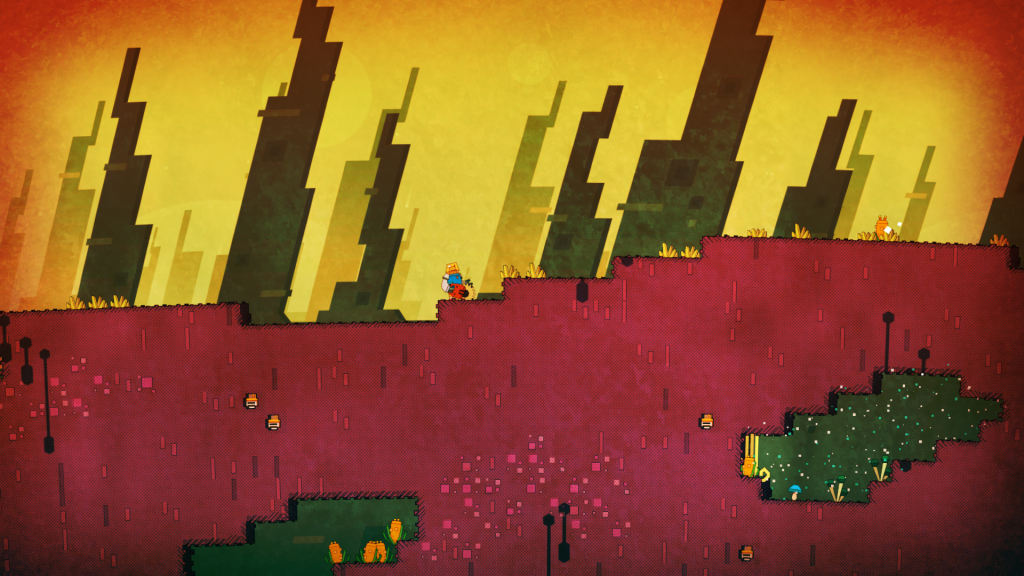 Nom Nom Galaxy has nice pixel graphics which is exactly what you would expect from a game like this. The advantage of going for graphics such as the graphics above is that they will still look good a few years down the line unlike the ever changing 3D HD graphics. I enjoy the graphics and other than that not much can be said, you’ll just have to look at the screenshots and judge for yourself. 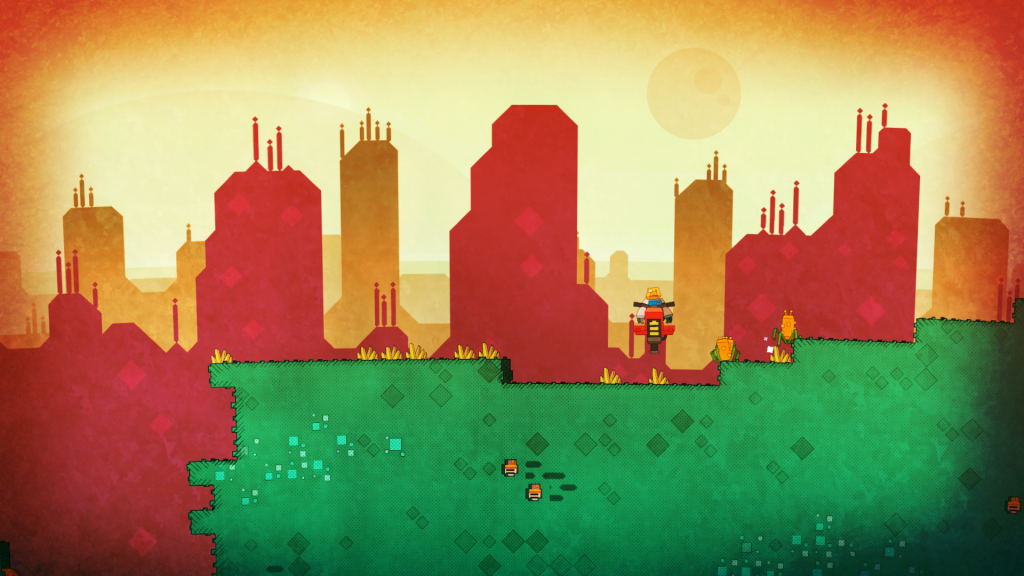 After finishing your soup you must carry it over and deposit it in the rocket. Multiple rockets can be built to improve efficiency. That’s the core of the game and what you will be doing for most of your playing time.

Aliens will attack on occasion and turrets can be built to protect against these attacks. Aliens will appear on the bar in the top right at seemingly random times and this can catch the player off guard if they are out gathering ingredients but the attacks aren’t really that difficult to deal with.

The objective is to get the circle in the top right to 100%. The percentage represents how much of the market you control on a foreign planet with the remaining percentage representing how much of the market your rival controls. You can see when your rival is shipping his soup by looking at the red bar going from the red shape to the circle. That’s essentially the entire concept of the game.

Flaws: A controller is pretty much required when playing this game which should not be the case for the company’s first steam game (which has not been released on any other platforms). You are not stopped from using mouse & keyboard (which I used) but the controls tutorials all use buttons from an XBox controller. It can be really difficult to get a grasp of the game’s controls with zero guidance as some of the bindings are odd and can’t be changed. TAB is Y, E is B etc. and the D-PAD seems non existent on a keyboard which limits what you can do.

My Thoughts: I found the gameplay to be enjoyable despite the controls fiasco. Like I said above there is something oddly satisfying about building a soup empire from scratch. My one gripe is that the rival soup company seems to start off at it’s max difficulty. I believe the difficulty should be scaled to reflect your own progress but sadly not and it took me a long time to find my stride. However, at that stage the damage was already done as there was a 69%/31% split in favour of my rival.

Another massive setback for the game is the lack of a saving mechanic at the moment. Q-Games has said that it will be adding one but this will probably be enough deterrent for most people from buying the game on early access. The 69/31 percentage split mentioned above was at roughly the two hour mark in to the game. I highly doubt that anyone will want to play the game for much longer than that in one session so saving is a vital feature.

Soundtrack: Nom Nom Galaxy features a mostly techno soundtrack that suits the atmosphere of the game. It’s not particularly upbeat or gloomy and the best description of it I can give is that it is just… there. Nothing highly memorable in my opinion and nothing to write home about. Standard. 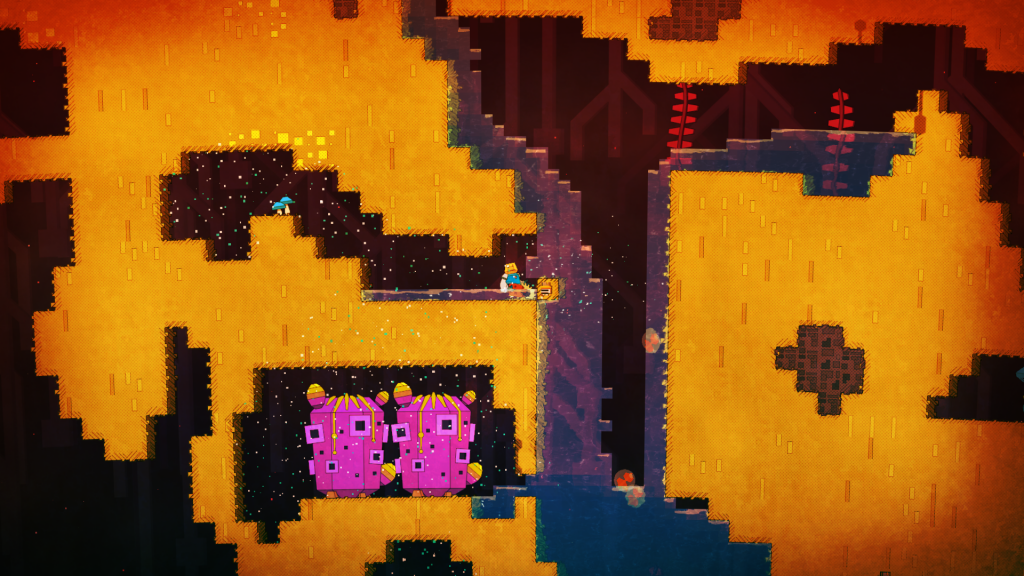 Options: The options menu is very bare and it features only resolution, language and ‘enter button’ which is again represented by XBox controls despite playing using a mouse and keyboard. The lack of any real settings at all leaves me wanting a lot more.

‘Break Time’: The day ends with your character remarking that it is nearly break time. After a few minutes the screen will slowly fade and you will be met with a sales graph and an option to buy new equipment using green keys that you have gathered. After you are done you will be teleported back to your base to start the next day. I find this feature to be annoying and not needed. It’s likely to happen while you are out gathering ingredients and it can be incredibly frustrating. The buy menu and sales graph should have been relocated to a button prompt within the base in my opinion. In addition, adding a simple day/night cycle to show the world is moving would have been a lot better.

Oxygen: A blue bar slowly goes down when the player is out of their base. It can be regenerated by going inside buildings or going inside pockets of oxygen found underground. Not once during my playthrough did I run out of oxygen, it takes about ten minutes without oxygen for the bar to go down fully and even after that your health slowly trickles down giving you enough time to get to a building. Making the bar go down quicker and maybe the addition of craftable oxygen gear might make this currently pointless feature mean something.

Death: When you die via suffocation, monster damage or fall damage you drop some matter, the ingredient you were carrying and you respawn at your base. Death is not a big deal and I only died once from fall damage during my playthrough.

Combat: Bizarrely, the saw does no damage to monsters and instead it is the player’s primary attack where they perform a punch move that deals the damage. Combat is not particularly difficult, find a corner and spam your primary attack and you should be fine. All enemies are pretty much the same, they charge you and deal damage and knockback. 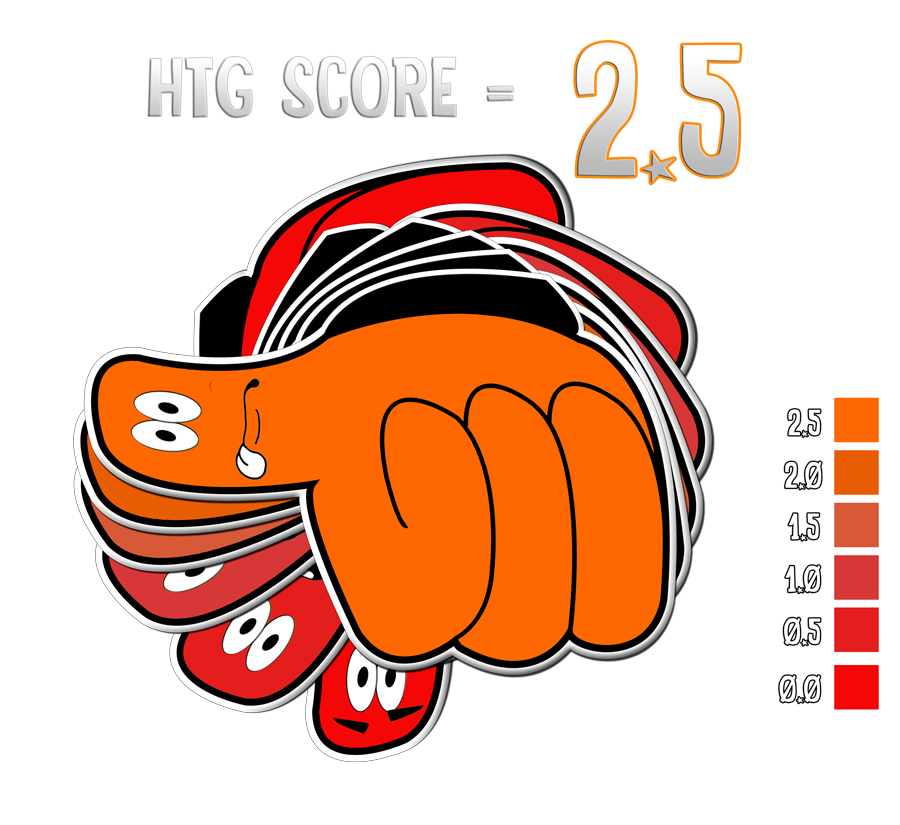 I give this game a 2.5 which is pretty decent for a game in it’s alpha development phase. I’ll likely have a further look at the game once it’s fully released.

I found Nom Nom Galaxy to be enjoyable despite the problems it has. Since it is only in Alpha state this is a very good sign, all Q-Games needs to do is polish the game and make it a passable PC port and I think the game will do well. However, it doesn’t really seem to have any replayability value even with the three different maps. The concept is the same on each map so once you’ve triumphed over your rival during one playthrough there is no real reason to play it again unless you are a hardcore fan of the game. The addition of some kind of challenge mode or something along those lines would be a great asset.

It’s the kind of game I would recommend getting on sale or as part of a bundle. You’ll get a few hours of fun out of it but don’t expect much more out of it in it’s current state.