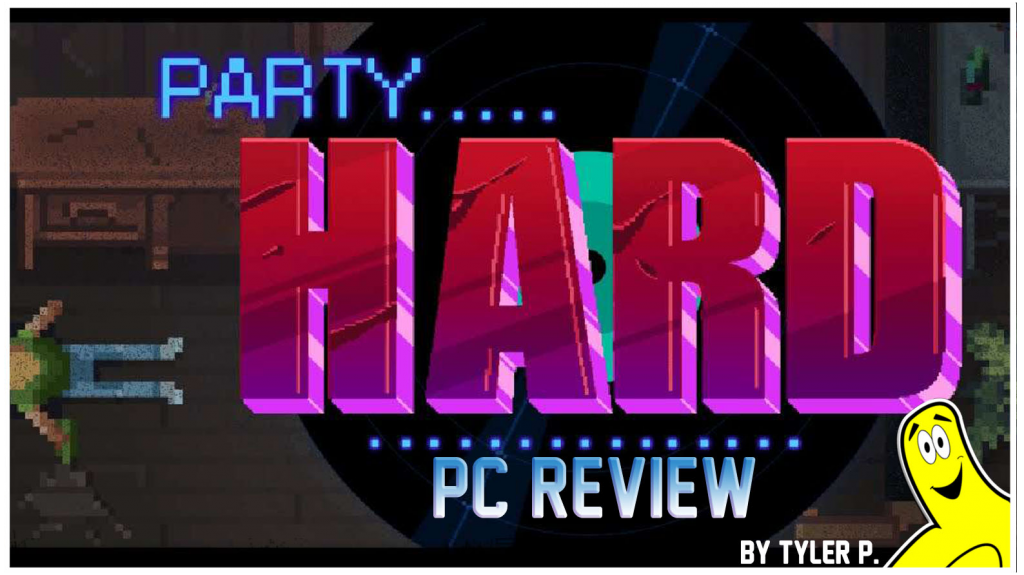 Like Partying? Like Murder? It’s time to Party Hard in this strategy game developed by Pinokl Games. Party Hard can be played on PC, PS4 and Xbox 1. 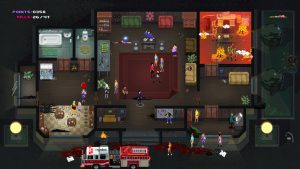 While you play as a murderer who’s known as a hero in game you are out seeking party after party and slaying everyone. This hero doesn’t have much of a backstory other than he can’t sleep. The story is told by an officer who’s being interviewed by an unknown figure that’s explaining his adventure in trying to take this murderer as he travels across America. With solid narration in each cut scene Party Hard wanting me to know more and more but as we drew closer to the end it became more predictable.

Party Hard is all about music… aside from murdering off course. Each level contains its own set of music and songs do rotate so it’s never the same song on repeat. Each song is an electronic song you can really dance to which really lightens the mood considering there are people dying left and right. There are sound effects of shanking people and cops sirens going off but the music is what’s mostly focused on. 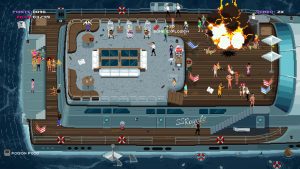 Party Hard is a top down 8bit game with lots of detail. While playing for a while the fact that the game is 8bit will not even cross your mind because of a detail that’s used in. Cut scenes were really enjoyable with this retro style of gaming adding a lot of texture and depth with pixels that isn’t seen very often in our current day.

Patience is something that is a must in Party Hard because killing everyone without getting caught can be quite tricky. There are so many different ways of trying to eliminate your targets from poisoning drinks too straight up stabbing them in the back. After using objects that may kill people and using items you can pick up like bombs, smoke grenades and more it will eventually come down to separating people from each other and taking them out one by one. Getting away with murder can be tricky at times because in some areas you’ll be able to hide bodies but it’s important to not be seen with them as it results in the cops showing up and arresting you. Even if the cops show up its possible to escape via open windows, secret passages or just getting lucky by out running them. Cops appear to be fairly lazy as they could be 2 feet away from catching you and they could just give up. Using a passageway or other escape method while being chased results in it being blocked off by a Mario like figure. At more times than none you’ll find yourself with nowhere to hide a body you that may be around you, that’s okay! As long as you aren’t near the dead body no one will know it was you and this opens up a window for framing people without intending to. While you are on one end of the house a random event might take place like people beating each other up which results in people you don’t have to worry about killing later one. These can be quite enjoyable to watch as you might have no clue what just happened. Cops can also kill people with their car if there happens to be people on the road. Each time you play the level it will be different. For example the horse that you can slap to kill people might be outside the house this round but the next time it could be inside the house or not there at all. But what about those people who just won’t move? Well it’s time to dance because people will either dance with you or get annoyed and separate from that group. Even though your skills may be awesome, other people might not think that and if they get annoyed enough they even knock you out for a little while. As the game progresses bodyguards begin to appear adding more difficulty as they can bust you if you get too close to them. We encountered several very small glitches that didn’t affect the game much. One of them even helped complete a mission. These included things like attempting to throws bodies off the room of a building but the body remained on top allowing other people to see them and call the police on us. We also encountered a glitch where the police would come from a train and get stuck next to it while trying to leave meaning we could go on a murder spree without worrying about cops. 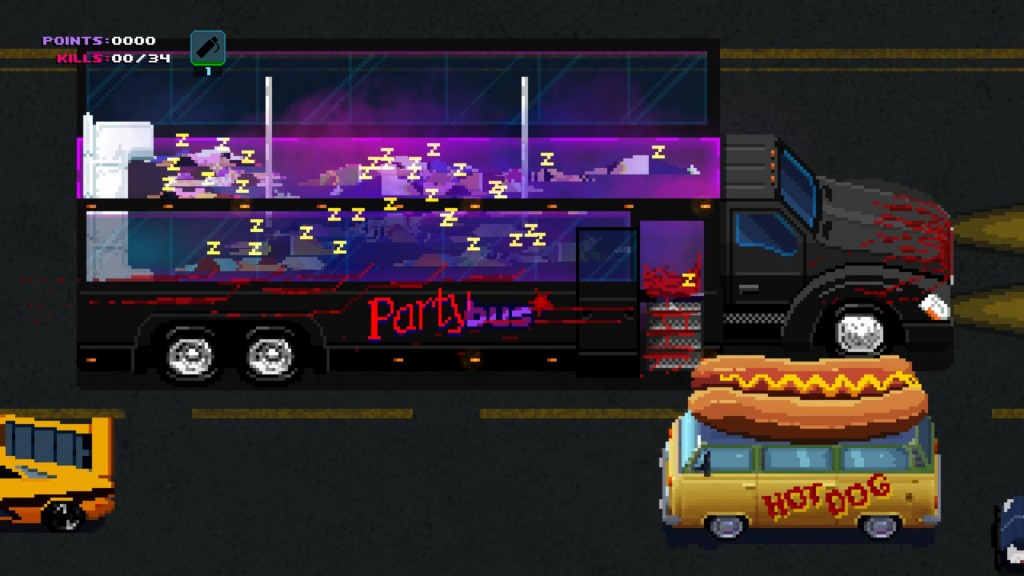 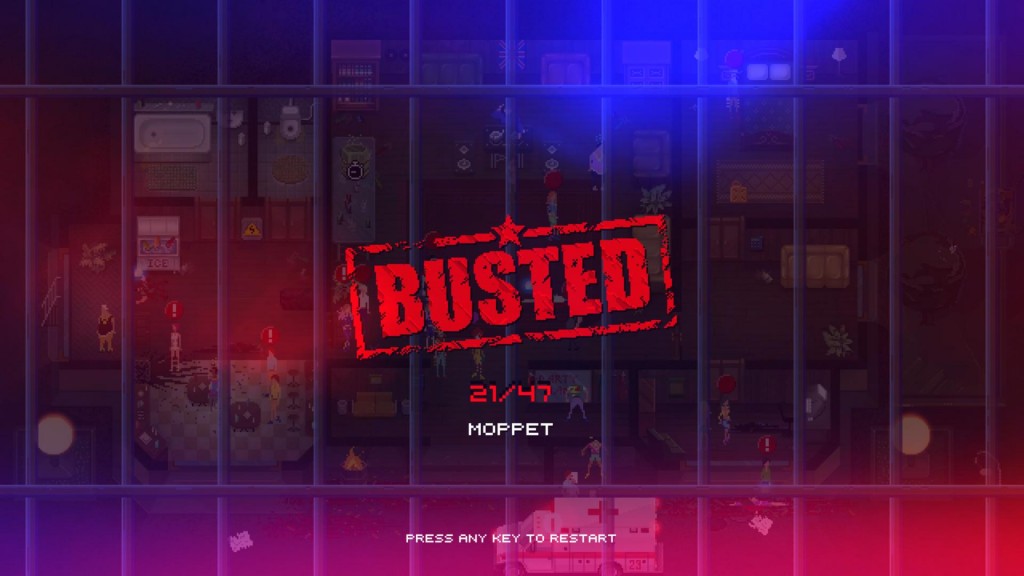 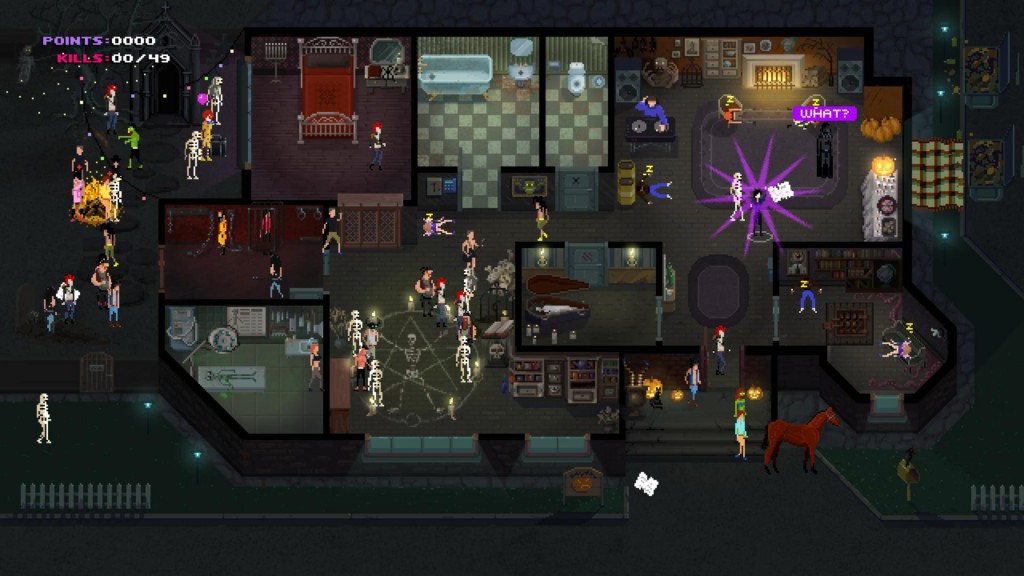 Party Hard is an incredible game that left us wanting more and kept us glued to our seats. Everything from music and story to the gameplay felt nearly perfect. The overall result ended with the game getting a 4.5/5 with the predictable ending and minor glitches here and there affecting its overall rating. We highly recommend this game to everyone, even those who aren’t familiar with this style of game as it’s very simple to get into and quite enjoyable.

If you have any questions or comments about this review, the game in general, or anything really, feel free to ask them on Facebook, Twitter, Google+, Youtube, or in the comments below and we will do our best to get back to you as soon as possible. While you’re on the above pages be sure to like us, follow us, and subscribe to us to stay up to date on the latest news and information that we have for you guys and now you can also support us on Patreon.com as well! Also we are now Live Streaming on YouTube and we are also now on Instagram so you can see all our awesome pictures. We hope you find this review useful and are enjoying the game!!!