Game of Thrones is back with episode two of the episodic game series released by Telltale games. The episodes will be released two to three months apart with a special sixth episode being released contrary to the usual five. The events of this series occur right after season three of the show and will continue until right before season five.

This time around the story felt very political. Most of it was just figuring out what to do to get what you wanted, and needed, for your house. That’s all well and good if you like politics and manipulating people to get what you want, but it’s not my cup of tea and it was a little hard to get into. Besides that, it felt a little slow. In part, that was due to the fact that I’m not the biggest fan of the political feel to it, but also because a couple of more characters were introduce, two of which you play as. This meant some obligatory background information here and there and while it is useful, it is a little boring. Don’t get me wrong though, there are some awesome moments intertwined in there too.

The story being set up overall is pretty amazing. The tension is building, bad things are happening, and when it explodes awesome things are going to happen (at least I’m assuming awesome). This episode made me want that finale all the more to watch everything blow over the edge. The overlying story linking the episodes together, in my opinion, is really what this game is all about storyline wise anyways.

However, as I wrote in my episode one review, the story can be a little confusing for those who haven’t watched the show or read the books. There are certain characters I know are a part of the main series, but I don’t know their significance or what their role is, so I can’t ascertain their role in the game. This pertains to the world of Game of Thrones as well. The world is huge with lots of different areas and I don’t understand the significance of a single one of those. I don’t even understand the significance of “The Wall” which is relatively important to one of the characters in the game. Honestly, I did feel a little less lost this time around because I had already played episode one and had gotten used to the world a bit, but still felt relatively lost. Honestly, a part of me believes this game would be a whole lot more intriguing if I had knowledge of the Game of Thrones universe.

I’m honestly not sure if Telltale even tried with the graphics this time around. They had the painted, blurred effect everywhere, and I mean everywhere. Sometimes it was subtle, but sometimes it was painfully obvious. Though this time they did add the effect around the characters, so sometimes when they moved you would see all these pixels get blurred around them too! I’m sure you can sense my sarcasm. Honestly, it was god awful and made it difficult to get through the episode since I spent so much time sighing and yelling at just how awful they were.

At one point, in the beginning, you’re on a cart with some bodies lying next to you. They were completely black. To be honest I think it was intentional, but it felt kind of lazy, especially since you specifically have the option to look at the body next to you. The bodies didn’t have to look perfect, but they could have done something other than leave them completely black.
Besides those two things though, the graphics were typical of Telltales style and were good. You just need to bypass all the blurry graphics everywhere else first.

The voice acting in Game of Thrones is as good as it is in every other Telltale series, which means it was great. I felt the emotions in the characters as they spoke and was greatly pleased with the accents. The soundtrack was no different. When there was a song playing, I felt moved and felt more attached to the game. The song at the end was magnificent too. It had a very rustic feel to it and the lyrics seemed rather cheesy for this day and age, but, for the time period, it felt perfect and it flowed with the game well. I could not have expected better.

As usual with Telltale games, Game of Thrones utilizes point and click gameplay with branching dialogue that allows user input. There are some quick time events here and there, but they’re incredibly easy and shouldn’t give you any problem unless you’re just plain not paying attention to the screen when it happens. However, this episode does feature a shooting element. It doesn’t last very long and is super simplistic, but it was pretty cool. Besides a couple of small segments in The Walking Dead, we haven’t really gotten to shoot many things and I am so looking forward to being able to use this feature in the future of the series.

Repeating what I said for the first episode, this is a Game of Thrones game. Violence happens. I don’t think it’s a bad as episode one or certain scenes in other Telltale games, but it is still there. This game is rated “mature” for a reason.

Other than that, I relatively enjoyed it. If you can get past the graphics, which does take some work, you’ll find a nice storyline there to pick up some of the slack. If you like politics, you’ll get an even bigger kick out of the story. If you don’t like politics, well you’ll still most likely enjoy the story to a certain extent. Not to mention, the audio this time was done really well and the song at the end really topped it off nicely. If you can get past this episode’s flaws, you’ll be in for a nice ride. 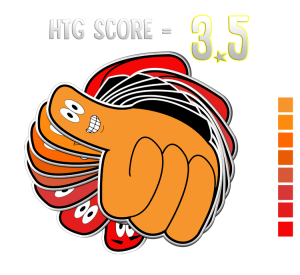