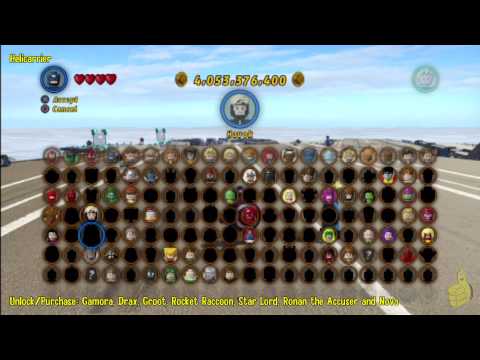 – Gamora — You must have completed the story before the mission to unlock her becomes available. In the Times Square area, one block up from the level 15 story mission icon, Galactus icon, you will receive a mission from Drax. Once you complete the mission Gamora will be unlocked. You can then purchase her for 150,000 studs.
– Drax — After completing the first mission from Drax, that unlocks Gamora, there will be a second mission he gives you, just slightly north of the previous one. After you complete that one there will be a third one you must complete that is located on the roof of the Marvel HQ building in Chinatown. Once you complete that mission you will unlock Drax and be able to buy him for 150,000 studs.
– Groot — To unlock Groot you must first complete the story mode, then you must complete the three missions he gives you to unlock him. The first is found just above the lake in central park, the flower car icon. The second is found just south west of the Daily Bugle in the park, it is the Mandarin’s boat icon. The final mission is found at the entrance to the X-Mansion, after completing all three and unlocking him, you can purchase him for 150,000 studs.
– Rocket Raccoon — After completing the second Rocket Raccoon mission and unlocking Star Lord, complete the third mission he gives you and you will unlock him. The third mission is found in the south east corner of the Manhattan HUB, there is a small patch of land that juts out along the coast, he is in the southern corner. Once he is unlocked you can buy him for 150,000 studs.
– Star Lord — To unlock Star Lord you must first complete the story and the first two Rocket Raccoon missions. The first mission is located at the garbage truck icon, two blocks north of the north west corner of the top of central park. The second mission is located one block north and half a block to the west from the road that runs through Central Park. Once you complete both missions you will unlock Star Lord and you can purchase him for 150,000 studs.
– Ronan the Accuser — He is located in Central Park just to the right of the circus tents. To unlock him you will have to find the hidden path which is behind the statue that is just south of his icon. Once there charge the three switches and the box will open. After you unlock him you can purchase him for 150,000 studs.
– Nova — He is located just east of the giant Godzilla icon in Central Park, complete the foot race, I recommend a flying character, and he will unlock. You can then purchase him for 150,000 studs.
. Its a pretty simply task, but knowing where the character token locations are can be helpful when earning the guardians of the galaxy trophy/achievement. Hopefully you find our Lego Marvel videos helpful and make sure to check out our Lego Marvel FREE PLAY series where we show you all 150 minikit locations. Thank you for choosing HappyThumbsGaming for your Lego Marvel Super Heroes needs, feel free to leave requests or suggestion on our social pages found below.

Link to artist who created our HTG Lego figures:
http://www.fiverr.com/pcbisly