What’s up everybody!!! With LEGO Marvel Super Heroes a week away from being released on PS3 and XBOX 360, we thought we would compile everything we know so far to one place and see what we got, what’s new and what looks to be the same. Now I will admit I have not played too many LEGO games but I have played LEGO Pirates of the Caribbean not too long ago, I platinumed it for the record, and I am currently playing through LEGO Batman 2: DC Super Heroes as a little bit of a buildup for LEGO Marvel Super Heroes. I have also played, and platinumed, LEGO Legends of Chima on the Vita, in other words I’m not a LEGO expert but I have some experience. If you need help on either LEGO Pirates of the Caribbean or LEGO Batman 2: DC Super Heroes or LEGO Lord of the Rings, be sure to check out our video walkthroughs/trophy/achievement guides.

Okay so lets get to the good stuff, the first thing I notice is that there are 155 characters that you can play as in LEGO Marvel Super Heroes, and that is not including DLC characters. If you guys haven’t pre-ordered LEGO Marvel Super Heroes yet, if you do so at Gamestop for PS3 or XBOX 360, you also get 7 DLC characters for free, so you may want to go drop $5 for some free DLC. The items you get for pre-ordering are 8 Playable characters: Hawkeye Classic, Spiderman Symbiote, Thanos, Dark Phoenix, A Bomb, Falcon, Winter Soldier, and Beta Ray Bill, 2 Vehicles: Spider Buggy and Hawkeye Sky Cycle, and you also get 10 additional races: 5 for the Spider Buggy and 5 for the Hawkeye Sky Cycle. In addition to the Gamestop preorder DLC, there is also an Asgard DLC pack, available Day 1, that will add an additional 8 playable characters. While a price has not been announced to my knowledge, it is still good to see that they will support the game with additional content even after it is released, even if it is just more characters. So in total, with the DLC there are a total of 171 playable characters!!! That is a lot of characters to unlock, no LEGO game to my knowledge has had more than 100 characters, and if they did it was barely over 100, so LEGO Marvel Super Heroes has a much larger library of characters to choose from which will hopefully mean a lot more combinations and opportunities to do things never been done before. Now I know a fair amount of things about Marvel but I have to say a fair amount of the characters included are unfamiliar to me, so they really went into the vault to make this game bigger and better than previous games. 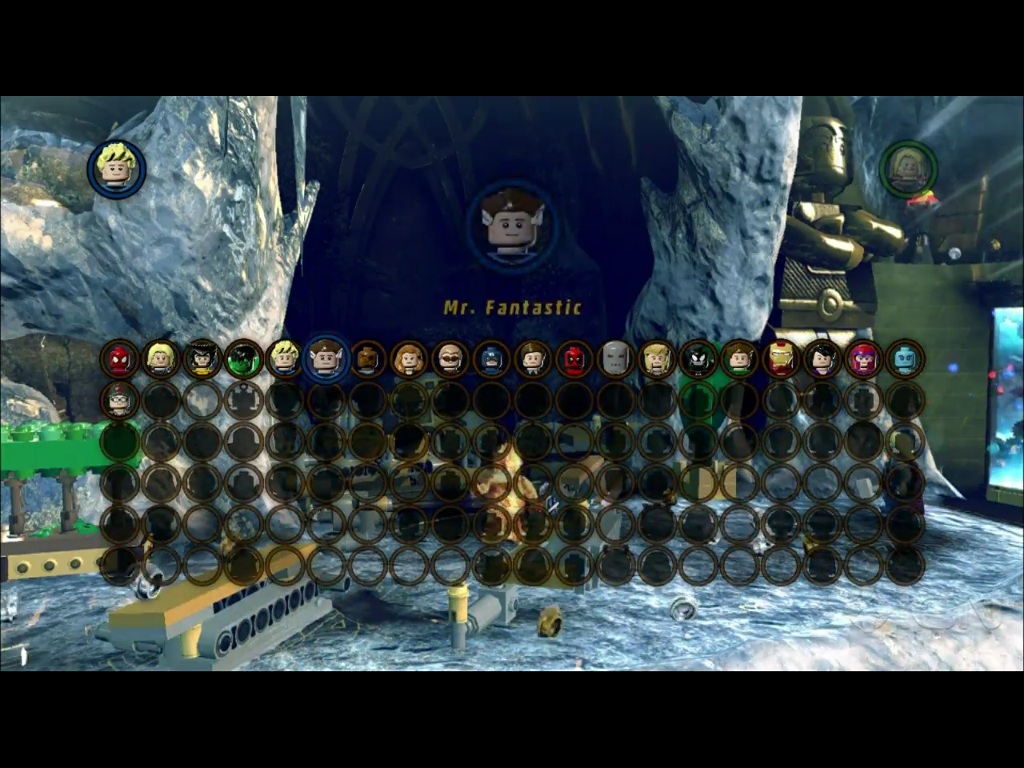 In addition to having 171 characters, including DLC, continuing the trend, they will all be voiced! While most are not voiced by their movie counterparts, Agent Phil Coulson is voiced by Clark Gregg, Phil Coulson, from Avengers, so it is really cool that they not only put him in this game but also let him voice the character as well. With every character being voiced again, and by the numerous trailers they have released, it is safe to say that the classic LEGO comedy, that we have all grown to love, will return in full force. If you have played LEGO Batman 2: DC Super Heroes then you know that they really play on the comedy of the characters and their relationships. LEGO Batman 2 made fun of Robin quite a bit, having him seek out approval from Batman, and Batman refusing to seek help from anybody. It doesn’t seem like much but the humor is one of the greatest parts of the LEGO games and it is one of the things that keep me coming back to play every entry in the series.

Another aspect that seems to be very similar to LEGO Batman 2 is the vehicles. While it has not been announced how many different vehicles there will be, it is pretty safe to assume that the number will be close to if not greater than LEGO Batman 2’s. There have already been about 10 different vehicles confirmed and they all look pretty awesome I must say but I know there will be plenty more that will be even more obscure and awesome. Now lets talk about the trophies and achievements for a second. While they have not been confirmed yet, a list had been leaked a little while ago, and after going over it, it seems to be pretty accurate/similar to the past LEGO games but they do offer some more insight into the game, assuming they’re correct which I believe they mostly are. According to the leaked list there are a total of 44 trophies, we have the gamerscores but not the trophies, bronze, silver, gold, platinum, which is more than what LEGO Pirates and LEGO Batman 2 had, only by a few but more is better.

From the list we can see that there will be 15 levels just like LEGO Batman 2 and there will be a few different collectibles that we will have to get. While no direct mention of minikits, I would be very surprised if there weren’t any, there is a mention to rescuing Stan Lee from every peril, which sounds a lot like LEGO Batman 2’s citizen’s in peril. A lot of the trophies seem to be references to the movies, or collecting sets of characters, for instance there is a trophy/achievement called Don’t I Know You with a description of: Team up Captain America and the Human Torch (in Co-Op). For those of you that don’t know Chris Evans played both Captain America and the Human Torch on the big screen and the trophy/achievement is obviously a reference to that. A lot of the trophies have that kind of humor which makes it a lot of fun to read, and I can’t wait to see all of them pop on my TV. As I have said this list has not been officially confirmed as far as I know but I would bet good money that it is at least 95% correct with possibly a few small minor changes if anything. If you would like to check out the list for yourself check out this LINK. If there was an argument that this list is not correct, or at least partially not correct, it would be that there are no mention of the classic drive all of the minikit vehicles or collecting all of the gold brick trophies/achievements. While there is a chance that they strayed away from those classic trophies/achievements, it does surprise me a little bit, however this is a bigger and hopefully better game, so maybe they’re just doing something different.

A big new addition to the LEGO series is something I am really excited for, large LEGO characters. 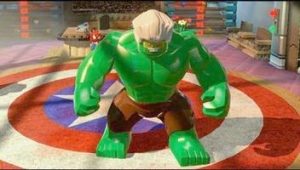 Usually LEGO characters are on the smaller side but now we have a number of Large characters that are just absolutely awesome. A few of the enormous characters are the Hulk, Juggernaut, Rhino, Kingpin, Abomination and many more. Now what’s the difference you ask? Well they’re basically huge and they do massive amounts of damage, and they destroy everything. I know I have wanted to run around with a large Marvel Super Hero and just destroy everything, almost everything, in my path for quite a while now. If you want to see the larger characters in action, as well as a number of other characters, check out this video here.

The last thing we should touch on is what the levels are going to be, pretty big part if you ask me. There have been, at the time of writing this, 25 confirmed locations in game. While I’m not going to list all of them some of the major ones are the HUB world New York City, Stark Tower, Doctor Doom’s Castle, Hydra Base, Oscorp Tower, X-Mansion, and Asgard. With the list we have it seems they stuck to a similar style of a main HUB that you can explore and then smaller locations inside that HUB. So inside New York City will be Central Park, the Statue of Liberty, Times Square, etc. that you can visit and walk around. This seems to coincide with what LEGO Batman 2 and LEGO Lord of the Rings did, moving away from the smaller port of LEGO Pirates of the Caribbean. While I am excited about an open world LEGO New York City to explore, I hope there is more to do in it than Gotham City in LEGO Batman 2, and I hope that getting the gold bricks, I’m assuming there will be gold bricks, is not as repetitive as LEGO Batman 2’s. Doing the same thing 50 times around Gotham City got annoying and boring really quickly so I hope they changed up the format at least a little bit.

Okay so now that we have all the info, lets compare the pre-oder bonuses between retailers. 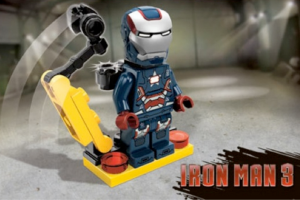 So I already told you about the Gamestop bonuses if you’re a PowerUpRewards member: 8 playable characters, 2 vehicles and 10 races but you also get a Spiderman keychain as well, if you pre-order from Walmart you get an ultra exclusive Iron Patriot mini-figurine, and if you pre-order from Amazon you receive a $10 games credit. It seems that there are no pre-bonuses for pre-ordering at BestBuy. It seems that, depending on your tastes, Walmart’s ultra exclusive Iron Patriot mini-figurine may be the way to go, but if you aren’t into rare collectibles, Gamestop or Amazon may be the way to go instead.

Also if you want to see yourself as a LEGO character be sure to check out a man that goes by pcbisly and you can find him here at fiverr:pcbisly’s Fiverr Profile. The man did a really great job of turning our mascot Thumby into a LEGO character and he would do the same for any picture you send him. He also gets the job done really quick and for an incredibly cheap price. So go check him out and get yourself turned into a LEGO character, and let him know that HTG sent you!

Alright guys and girls that wraps up what we know about LEGO Marvel Super Heroes – Everything we know so far. If you enjoyed this article or have any questions or comments let us know. You can always check us out on Facebook, Twitter, Youtube, or right here on our website. We hope you enjoyed and be sure to keep an eye out for our LEGO Marvel Super Heroes videos when the game is released for PS3 and XBOX 360 on Tuesday October 22!!!

If you are interested in downloading this game digitally it will be available Day 1 on the PSN store, you can preorder here.

If you are interested in playing a Demo, the demo drops on XBOX 360 on October 15 for download.

Here is another trailer showcasing Stan Lee and his character.
http://www.ign.com/videos/2013/09/04/stan-lee-has-amazing-superpowers-lego-marvel-super-heroes