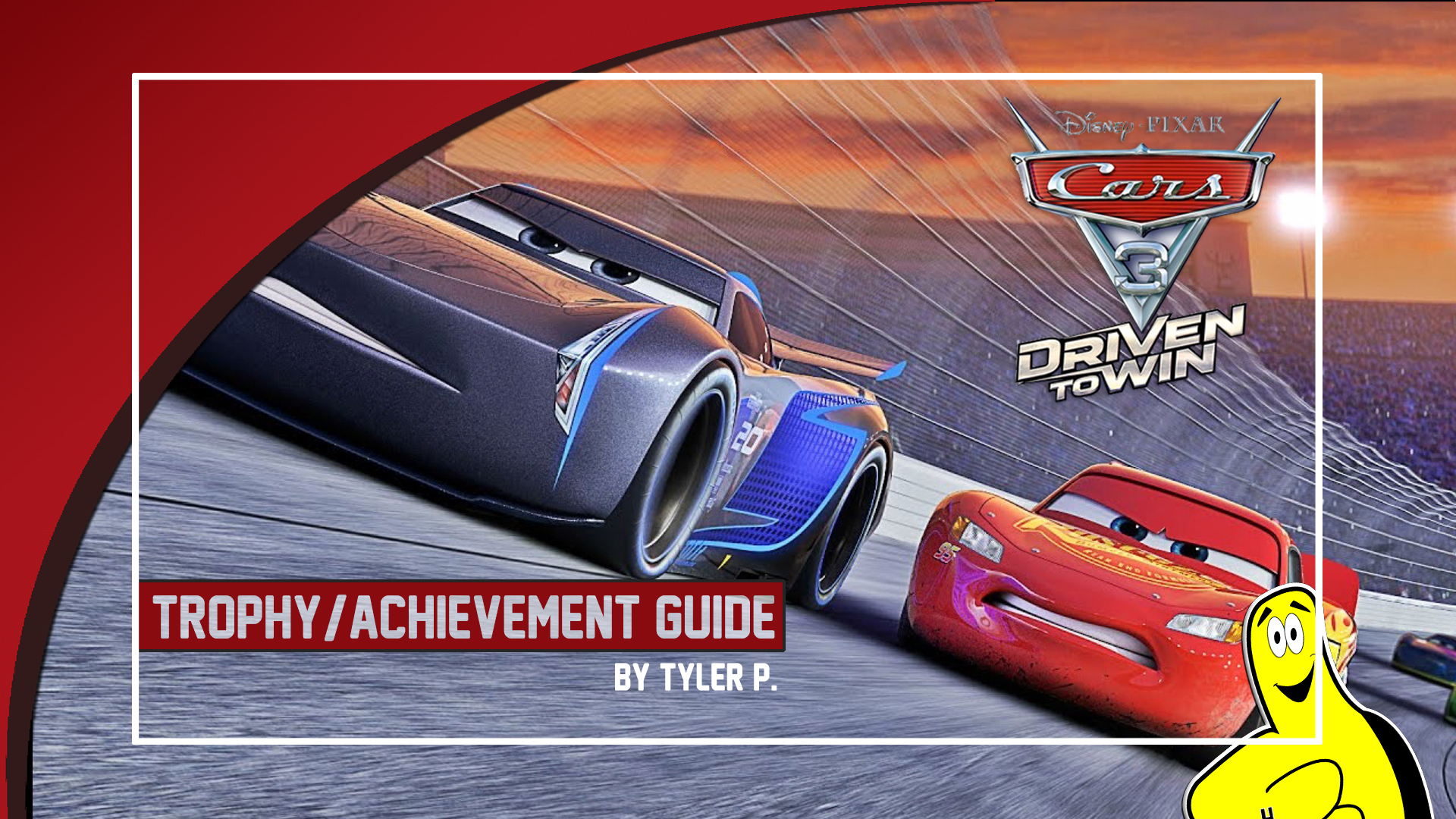 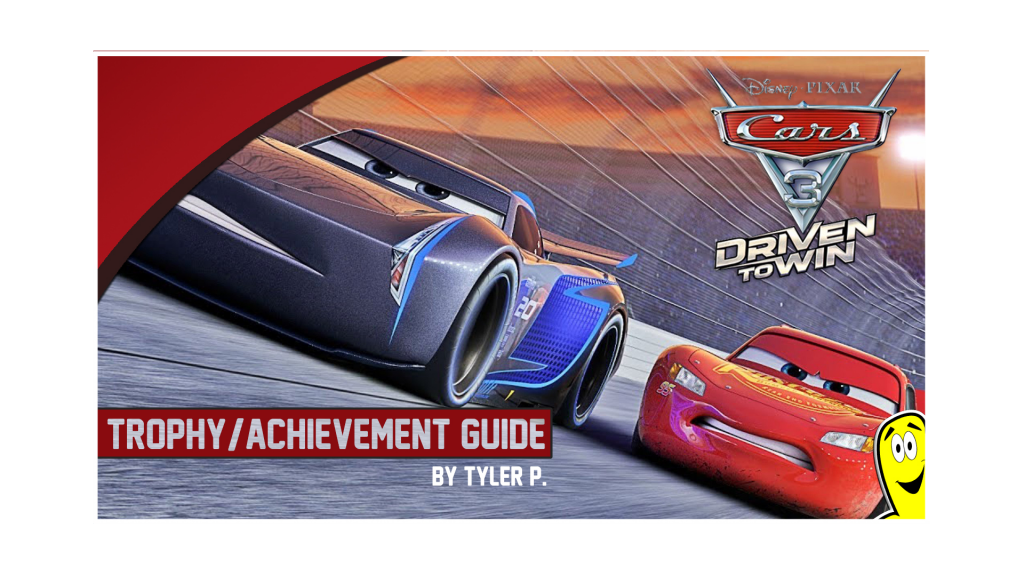 Most of the trophies below will come naturally just by playing if you do plan on going for the platinum. The “Hall of Famer” trophy does require a couch co op buddy. This trophy can be earned using the shareplay method on the PS4 but it isn’t really reliable. Cars 3 is very simple and easy to get the hang of but be ready to play the same races over… and over… and over…

Step 1: Complete each race and earn at least 1 medal in each. During this you’ll unlock many skill checks and most likely get a good chunk of the trophies.

Step 2: Go to the Thomasville Playground to get the Hats and snag some skill checks that are in that area.

Step 3: You should have most of the trophies by now and so this would be a great place to seek out those skill checks you may have missed and snag any remaining trophies.

Collect every trophy in Cars 3 to obtain this.

There are several locations where this can be done but we found the easiest place to do this is on “Radiator Springs Wheel Wells Loop”. There will be a section where you’ll enter a cave and the main path continues to the left. If you continue slightly to the right instead of going left there is a section where you can jump to higher ground. This will lead to you a very large ramp. If you’re having troubles finding this on your own, watch the other racers as they take shortcuts often. Before taking the jump make sure to have boost saved and maybe even use “In the Zone” just in case. Be sure to hold X for that extra height. Hold any direction on the right analog stick to continuously perform a trick. Land it and the trophy is yours!

King of the Playground – Earn Bronze, Silver, or Gold rings in every Thomasville Playground Challenge (Gold/70G)

There are 4 different types of challenges and each type has 3 different locations. Each challenge has a requirement to earn at least bronze rings. That’s all you need to earn this trophy but if you are planning on collecting the Platinum you’ll need to collect at least 1 silver ring for each challenge since that is required for the “Hall of Famer” trophy.

Pretty straight forward. There are a total of 21 tracks and each time you select a new one you are given the choice to do 1, 3, 5 or 10 laps. Keep going until you hit 100.

Pressing down the right analog stick will throw your car backwards. Keep doing this for small or long stretches and the trophy will come quickly just by playing.

This can be a little tricky but can be easily done on any track. Saving several turbo boosts at a time is how you’ll achieve this. At the start of each wave the karts will a fair distance ahead of you but will allow you to catch up so don’t use any boosts until you’re a little closer. Once you feel you are close enough just 2 or 3 boosts to catch up to them. These cars are meant to be quicker than you so if you miss your chance you’ll have to save up some more boosts. Once you’re close enough hit right or left on the right analog stick to bash the kart. You’ll know you hit them if points appear after you bash one.

There are a total of 23 different characters. Cars can be unlocked by playing “Master-level races”, completing skill checks and 1 will be unlocked after collecting all 10 Hats in the Thomasville Playground. Complete 1 race with each to unlock the trophy.

To go in the zone you’ll need to collect a full bar of turbo. This can be done by drifting, driving on 2 wheels, driving backwards, doing tricks, picking up gas cans and jumping into blue gas banners. Once you have a full turbo bar press square twice to go “In the Zone”. Do this 30 times to earn the trophy.

This can be one of the more tricky trophies in this game if you decide to challenge yourself and do it the intended way. If you just want to quickly snag this trophy it can be easily done by going into any stunt race and jumping and doing a flip on flat ground. Keep doing this until the trophy pops.

Turbo boosts can be earned  by drifting, driving on 2 wheels, driving backwards, doing tricks, picking up gas cans and jumping into blue gas banners. You will have 4 bars located on the bottom of the screen letting you know how many times you can boost. To turbo boost press square. This will most likely come naturally by playing but if you struggle just go to a “Best Lap” race and select 10 laps.

Refer to “Hall of Famer” trophy.

Refer to “Hall of Famer” trophy.

To bash a car press right or left on the right analog stick when next to a car. Bash 100 cars and the trophy is yours.

Pressing up the right analog stick will throw your car backwards. Keep doing this for small or long stretches and the trophy will come quickly just by playing.

This will come naturally just by playing. It’s possible to easily earn 20+ turbo boosts per race.

At the start of each race you’ll have time to rev your engine. A little bar will appear prompting you to press R2. Start mashing R2 as soon as the prompt begins and quickly fill the bar since there isn’t too much time to do so. Do this 3 times to earn the trophy.

There are a total of 136 skill checks in Cars 3. Most of these will come naturally by playing but there are several that you will have to go out of your way to get. A friend will be needed to help for this trophy since some of the skill checks require completing cup series in first and second meaning you can’t just leave a second controller laying around. Cars 3 doesn’t offer online multiplayer so you will need 2 controllers at least. There is a way to do this online with a friend but this is dependent on how well your internet is. A friend can take over player 2 using the “Share Play” feature but it may not be the most efficient method.

There is a section on this list revolving around the use of specific weapons and using them in specific ways. While some of them will appear frequently when you pick up an item box, some of the are dependent on which place you are in the race similar to games like “Mario Kart”. The simplest way to go about getting these weapons are by hanging back but not letting the other racers get too far ahead of you. A little bit of luck is required as well to actually get the weapon your looking for. If you aren’t sure what a weapon looks like they can be viewed by pausing the game in a Battle Race or from the extra tab at the main menu.

All 10 hats can be located in the Thomasville Playground easily with the help of the map once you enter as small red hats. Something the game won’t provide is how to get to several locations. The majority of them are simple to locate and jump into but a couple will be on top of green rails. You’ll need to grind these rails. This can be done by jumping onto them and holding circle.

This will most likely come naturally by playing takedown events. Hitting wave 6 is simple since the blast radius of karts exploding is fairly large. Bombs are great for taking out groups while homing missiles easily take out the final kart in the wave. Each wave has 15 karts and 8 can be on screen at 1 time. You’ll be given 3 minutes and 30 seconds to take out 90 karts.

To go in the zone you need to save all your turbo boosts until the bar on the bottom is full. Press square twice to go “In the Zone”. This can be done in any race, just save all your boosts until the you can go in the zone. Doing this 4 times shouldn’t be any problem but if you are struggling with this go play a “Best Lap” race and set the laps to 10.

There are a total of 21 races and will come naturally if you are going for the “Hall of Famer” trophy.

Stars All Around – Earn a star in every event (Gold/90G)

There are 5 categories of races. Race, Battle Race, Stunt Showdown, Takedown and Best Lap Challenge. There are 21 races for each of these meaning you’ll have to do 105 races. This will most likely be one of the final trophies you earn for this game. The minimum requirement is to at least earn a bronze medal in each of these. This is incredibly simple if you are playing each race on easy, just very time consuming.