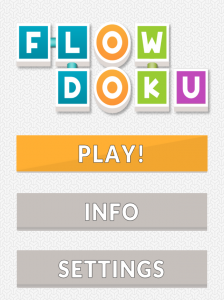 Whats up everybody!!! Today we will be showing you a Sudoku-ish game called Flowdoku, while similar in nature Flowdoku uses shapes and patterns to complete the grid. Flowdoku is a new title just released on IOS/Android and is free to play. With over 250+ free to play levels there are also multiple packs that you can buy using in game currency. Each pack consists of an additional 25 levels for 3 “jewels”, but you start with 9 jewels so you can buy an additional 75 levels if you so choose. You can also unlock additional “jewels” by completing in-game achievements. When you start the game there are 4 different size boards you can play on, 6×6, 8×8, 9×9, and 12×12. Once you choose the size of the puzzle that you want you can choose to play on difficulties from very easy, only available on 6×6 boards, to evil, only available on 9×9 and higher boards. 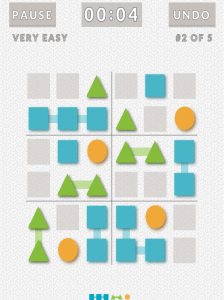 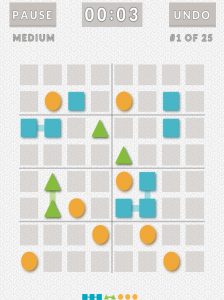 As i mentioned before the premise of Flowdoku is very similar to Sudoku in the sense that you must fill out every box of the grid with a pattern, instead of numbers. In the 6×6 boards you must have three blue squares, 2 green triangles, and one orange circle in each box. The catch is that the blue boxes and green triangles have to be connected, this does not count for the rows or columns but you still have to have three blue squares, two green triangles and one orange circle in each. In each different board size there are different patterns that must be completed with less and less tiles available at the start depending on the difficulty. Like any Sudoku ish game, the higher in difficulty you go the more challenging the levels get, you will have to really use your brain to complete the levels. If you do get stuck there is always a hint button as well as a return to first mistake option allowing you to try different things until you realize you’re wrong, or right. The game is overall quite fun and puts a unique spin on a classic game, creating a whole new game in the process. The game also utilizes some touch screen mechanics allowing you to zoom in on a box or by dragging a tile into another box instead of having to tap the boxes to pick the tile you want. Anyone who has some time on there hands or just likes puzzles will have a great time playing this game, especially with over 250 levels plus the additional levels that you can buy using the in game currency that is provided as well as unlocked. The game also utilizes an awesome save feature that saves everything you do all the time. Anyone with an IPhone or android phone should definitely pick up this free game, there is absolutely no reason not too. 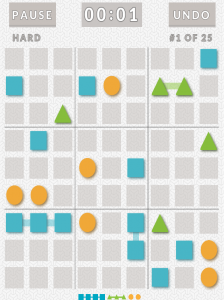 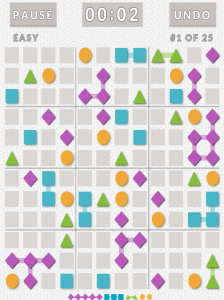 See the images below for the in game purchase packs and part of the achievement list. 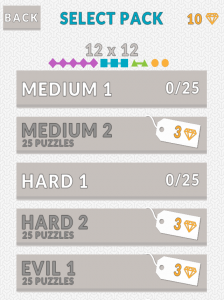 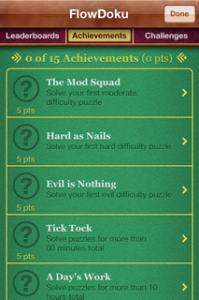