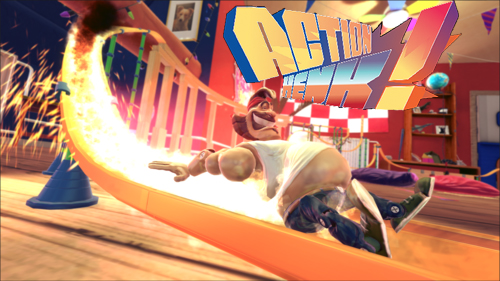 It is important to understand that this game is still in a pre-Alpha stage meaning there is a very long way to go before the final release is done.  Created by RageSquid; Action Henk is having early access on Steam on June 18th, 2014.

Founded in 2012, Ragesquid is an indie game studio from the Netherlands.  They focus on party games, the type of game that makes you want to invite all your friends over for a local multiplayer gaming session that will leave you all entertained.

Action Henk is an action hero-toy speed run platformer.  To Increase your speed runs you will have to manage your momentum, acceleration, and friction while running, jumping and butt-sliding your way through the obstacle tracks.  The game itself is quite simple in description but complex in mastering.  There is a starting point, an ending point, and the whole objective is to get from start to finish.  Along the way you will need to slide down ramps to build up speed, jump across gaps to avoid death, and run your way through obstacles to get to the finish as fast as you can.

When I was first introduced to Action Henk I was enthralled with almost a retro feeling.  The fact the level platform is a 2-D railway with 3-D elements I loved it from the beginning.  It was a game that brought back my love for Mario in looks, Sonic in gameplay, and Hot Wheels from my childhood.  It also seemed like a game that was very easy to play but difficult to master.  Anything with those qualities is an instant win.

The graphics are very simple and easy to follow.  They are also not very demanding allowing more players to get involved that may not have the best of computers.  They are also very fun; not only are you a little fat man running on a track made from blocks, car tracks, and other nick-knacks that would be found in a young child’s room. 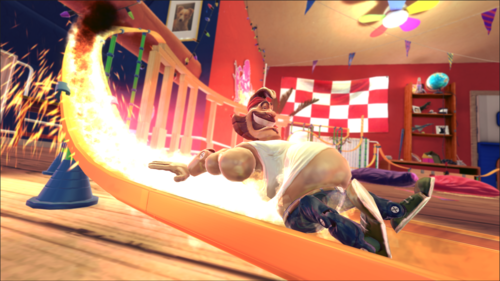 My Thoughts – I can’t say enough of how enjoyable this game is.  It is also strangely addicting in nature.  Experimenting with different routes in-game or even just taking a different approach could change the speed of your Henk extremely which keeps the game fresh and fun.  Because this game has a world leaderboard you can see the time of the best out there.  Which character did they use, what path did they take, but most importantly what small adjustments shaved three seconds off the clock?

Controls – The controls are very simple but unchangeable.  Hopefully in later versions of the game one will be allowed to change the controls to your liking.  But for now they are the arrow keys, the button ‘X’, and the spacebar only.  Arrows make your character run left or right, or slide down a hill.  The ‘X’ will use the grappling hook in
game (only in certain levels).  The spacebar will make your character leap over hurdles or change your approach for a jump jetting you faster down the track.

Time / Ghosts – Every level has a separate leader board that is based off of everyone in the world.  I believe that there will be a local leaderboard at some point so if your friend plays at your computer you two can compare best times.  Every level also saves a ghost file and allows you to race against one of your choice.  The current availability of ghosts are the following: the quickest time in the world, your own personal best time, a friend of your choosing best time, a medal best time consisting of bronze, silver, and gold, or of course against no one if you want the track to yourself.

Characters – There looks to be four characters that will be available in the full version of the game but currently are only allowed to play Henk.  I have no information if these other characters perform differently than each other but I will take it as assumption that they do.  The first character and the only one you are allowed to play in the pre-alpha is Henk.  Henk is a short man with a large belly.  He is the anti-typical action hero but either way he always has a huge smile on his face waiting for more Action!  The second character and on are just speculation as they are just silhouettes so no descriptive features can be seen aside what can be made out from black blobs.  The second character looks like an older gent with a bald head lifting free weights that are oversized.  Maybe an older gent that is super in-shape for his age?  The third character is the most mysterious.  It looks like a skinny man wearing a helmet of some sort, but not alien-like.  Looks agile and fast but I have no idea if this will be the case.  The fourth and final character looks to be a business man, the real white collar type.  Carrying a briefcase and always looking to his watch he may be fast on principle, always needed to be somewhere new.

Levels – Consisting of Hot-Wheels tracks, toy blocks, and other railway type items the tracks are simple to follow.  If there are multiple paths to take they will normally be easy to identify.  Every track will feature some place that you will need to run, jump, and slide your way through to make it to the finish line.  Every level is also different from the previous in some way making it feel fun the whole time you play and not repetitive at all.

Items (In Game) – There is a single item found in certain levels.  That item will be ran across in game and you will have it equipped for the remainder of the level.  The grapple hook (more like a grapple plunger) allows your character to swing across large gaps by applying your grapple to a roof or wall and flinging yourself further along the track.  The grapple is easily the most difficult aspect of the game but in my opinion the most fun.  Using Centripetal force you can easily jettison yourself along the track at much higher speeds that you could by running.  The feeling of this grapple easily compares to Little Big Planet’s Grapple and Worms: Armageddon’s rope.

Death – As a child we all played the game, “the ground is lava”.  In this game it’s a reality as if from a child’s imagination.  The ground looks normal with wood flooring until your character gets close.  It then turns to lava as your character falls in causing a very un-animated death.  After a few seconds the level will reset and start your time over as if you had just started the level.  Death is not a setback, but more a warning that you shouldn’t have made the jump in the way you did.  Try again later and next time do it right.

Age – Age level for this game ranges from the young child that loves seeing and controlling action figures, to the older adult that enjoys a good challenge.  As stated previously it is a very simple game in concept and a very difficult game to master.  The combination allows for anyone to play and enjoy it as much as any game could.  The younger folk will have more difficulties in the later stages of the game where button pressing combinations need to be executed properly to survive but the first sets of levels should have them appeased for a good amount of time.

Replay Worthiness – This game can be played over and over without much if any lack of enjoyment as time goes on.  The levels are short and quick making it feel fun and not like a job.  Each time you play there is that chance of beating your fastest time, even if it is .2 seconds faster it was quicker, making you that much better of a player and that much closer to the top score in the world.

Soundtrack – There is not much in the way of variety of music, but the music they have in game fits perfectly for what type of game it is.  The Menu music has an up-beat catchy tune that oddly enough doesn’t get old after letting it sit there on the screen.  The loading music is the typical elevator music.  The in-game music is very similar to the main menu music but it feels easily 30% faster.  The increase in speed makes you want to run and move fast which of course is what this game is all about.

Options – There are not a lot of options currently except for graphic decrease or increase making it easily accessible with a slide-bar to make the graphics as high or low as you like.

Our Review Score – Currently the game is fun and enjoyable but doesn’t have enough debth to make it a long lasting game (remember it is in Pre-alpha).  Assuming this game will continued to be worked on it will be an incredible game and I highly await the arrival of future updates.  That being said Action Henk receives a 4.0 Thumby out of 5.0. 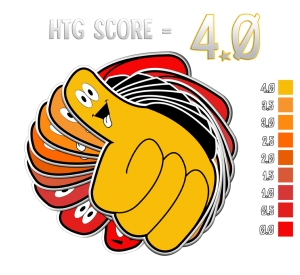 Final Thoughts – Obviously this game is in pre-alpha and is well on its way to becoming a very successful game.  There are many things going right for it currently.  The gameplay, the graphics, the ghosts are all ready for a mass release.  The only thing the game is lacking currently is instructions on how to use the grapple (took me testing every key on my keyboard to find it), additional characters and what their bonus of in comparison to other characters are, and more levels.  Currently there are only 12 levels to play with in the pre-alpha; it is more than enough to test out and play, but for a full-length game I’m really expecting a good 80+ levels on final release. 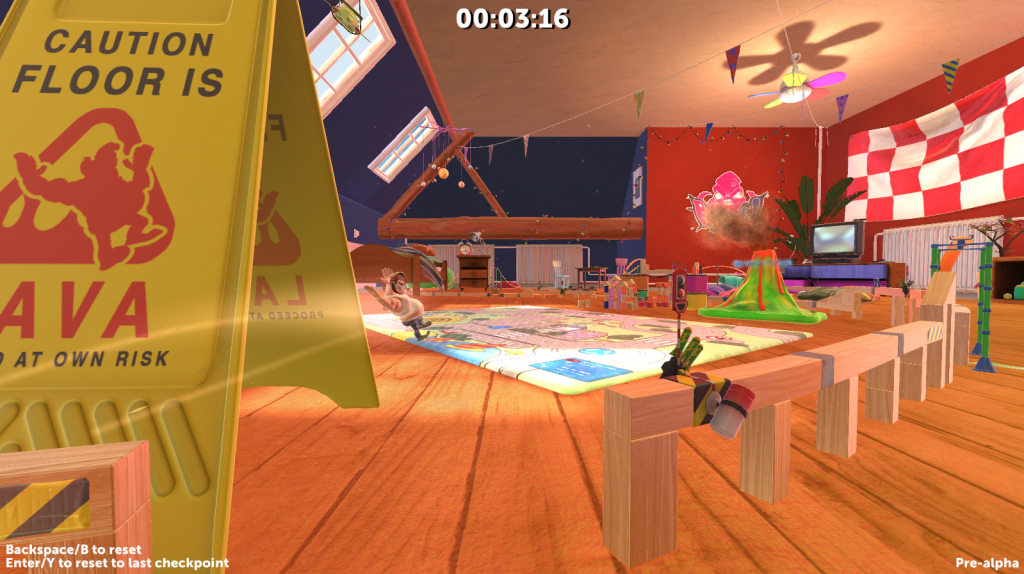